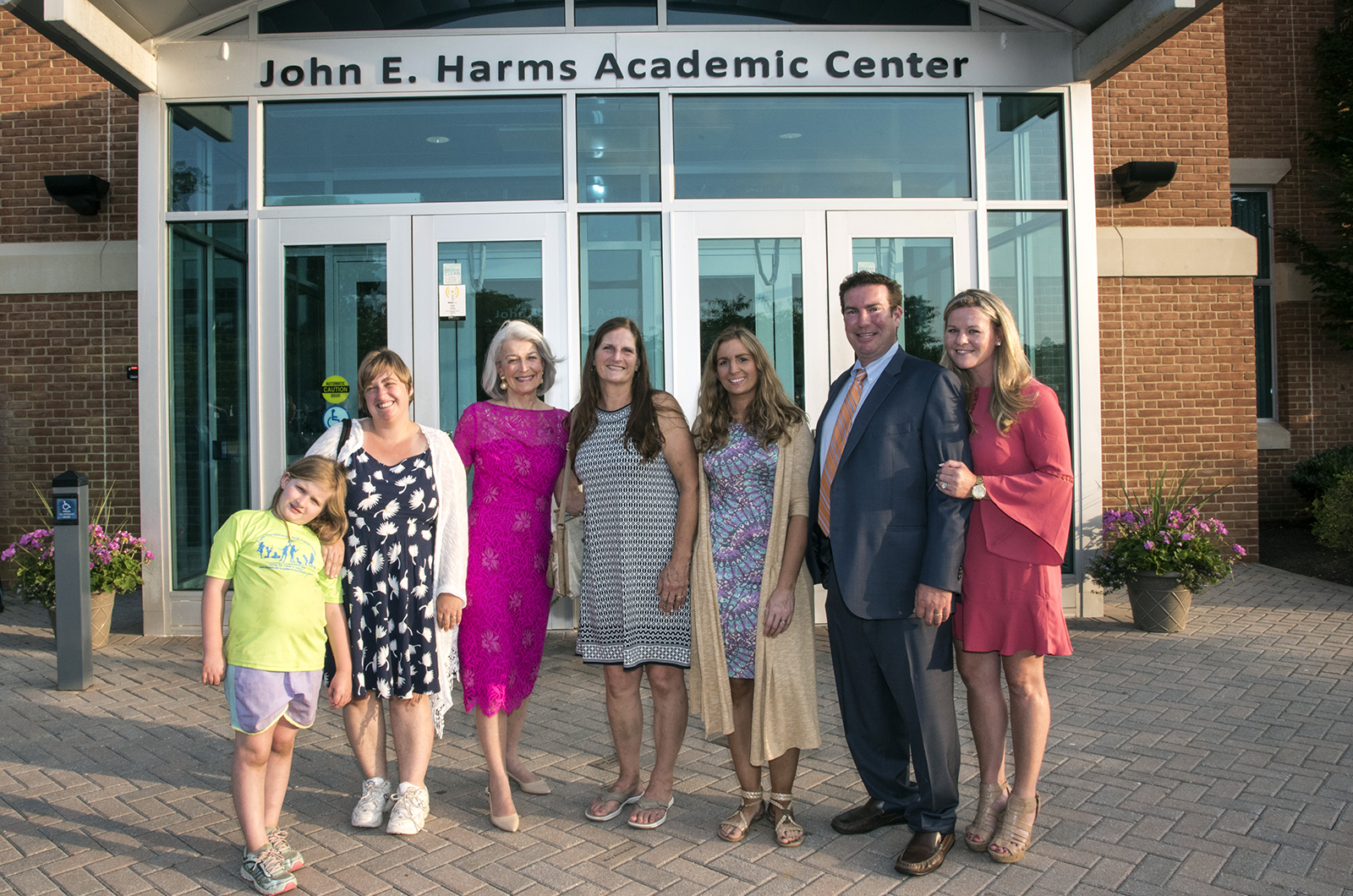 The College of Southern Maryland (CSM) officially named the flagship building at the college’s Prince Frederick Campus at a ceremony June 15 in recognition of Marianne Harms and her late husband, John E. Harms. Community and business leaders and college supporters gathered for refreshments and remarks as they celebrated the naming of the John E. Harms Academic Center, formerly known as Building A, in the center’s atrium.

Marianne Harms of Huntingtown, a major advocate and supporter of CSM and the widow of John Harms, participated in the ceremony. “I wanted to make sure he was not forgotten,” Marianne said in an emotional speech. “This is my way of honoring him.”

Born in Hagerstown, John Harms was an engineer and founded the John E. Harms Jr. and Associates Engineering consulting firm in 1955. He served as president and CEO for 45 years. He died in December 2014 at 93 years old.

“John was a self-made man,” Marianne Harms said. “Tall, broad-shouldered … He was a larger-than-life man, similar to a John Wayne-type in my eyes. There was nothing he could not do.” The couple met one another when they were both serving as board members for the newly opened Annmarie Sculpture Garden & Arts Center in Dowell.

“My husband believed that the value of a man should be seen in what he gives and not in what he is able to receive,” Marianne Harms explained. In 2002, the couple set up the Harms Foundation to provide scholarships for students who didn’t necessarily have the top GPA but who had “glowing reports from teachers and dreams for the future.” It was through the experience of combing through scholarship applications that the couple learned of the great need for financial assistance in Southern Maryland for those seeking to further their education. They also noticed the numerous mentions of the College of Southern Maryland in those applications. This led to the Harms starting a long-term relationship with the college as benefactors.
“Finding the College of Southern Maryland was a great gift for us,” Marianne Harms said.

With a vision to positively impact students and their futures, Marianne Harms continued this commitment to the college last year with a $1 million gift to provide scholarships for CSM students. The gift, which includes $500,000 in cash and a planned gift of $500,000 through a Charitable Remainder Annuity Trust, is the largest in the CSM Foundation’s $10-million “Make An Impact Campaign.” CSM’s Impact Campaign is a transformative three-year outreach and fundraising effort that will culminate in 2018 with the college’s 60th anniversary.

“All of these funds will be directed to an endowed scholarship, the John and Marianne Harms Endowed Scholarship Fund, honoring my late husband, John,” Marianne Harms said.

The John and Marianne Harms Endowed Scholarship will be awarded annually, with preference given to students from Southern Maryland who demonstrate financial need. The first round of scholarships will be awarded beginning in the fall 2017 semester. As part of the Harms’ Impact Campaign gift, the flagship building was named in John’s honor.

In addition, Marianne Harms encouraged Maryland State Sen. Thomas V. “Mike” Miller to help secure state funds to match the Harms’ donation. Through Miller’s sponsorship, the state awarded a $500,000 bond grant to CSM, which will be used for renovations by the Southern Maryland Studies Center, which collects and protects archival material related to the region.

In his remarks at the June 15 naming ceremony, Miller acknowledged both Marianne Harms’ and CSM President Dr. Brad Gottfried’s commitment to supporting and improving CSM. “The two of them are like magic,” he said, calling the college “an amazing institution.”

Amee Patel, a speaker at the event, described the changes she has seen at the college since she started as a student, when classes were being held in trailers on the campus located on Broomes Island Road. Patel went on to build on that higher education foundation by attending University of Maryland, College Park and eventually earning her master’s degree at Johns Hopkins University. Patel is now back at CSM as adjunct faculty and a student services support manager at the Prince Frederick Campus.

“I see the new transformation of this building to the John E. Harms Academic Center as part of the continuation of the warmth and friendliness of this campus,” Patel said. “This building represents the heart of the campus, where everyone is working toward a common goal — transforming lives through lifelong service.”

“We recognize an individual who made a profound difference in our community,” Gottfried said. He noted that the community has benefited from the Harms’ philanthropy in more ways than their generous donations to CSM. The couple has previously donated funds to create the Healing Garden at Calvert Memorial Hospital, the Harms Gallery at the Calvert Marine Museum and the Marianne Harms Multidisciplinary Suite at the Sheldon E. Goldberg Center for Breast Care at Calvert Health System.

For information on the Impact campaign initiatives, naming opportunities and more, visit http://IMPACT.csmd.edu or call the CSM Foundation at 301-934-7649. To view a gallery of photos from the event, visit http://csmphoto.zenfolio.com/harmsdedication.