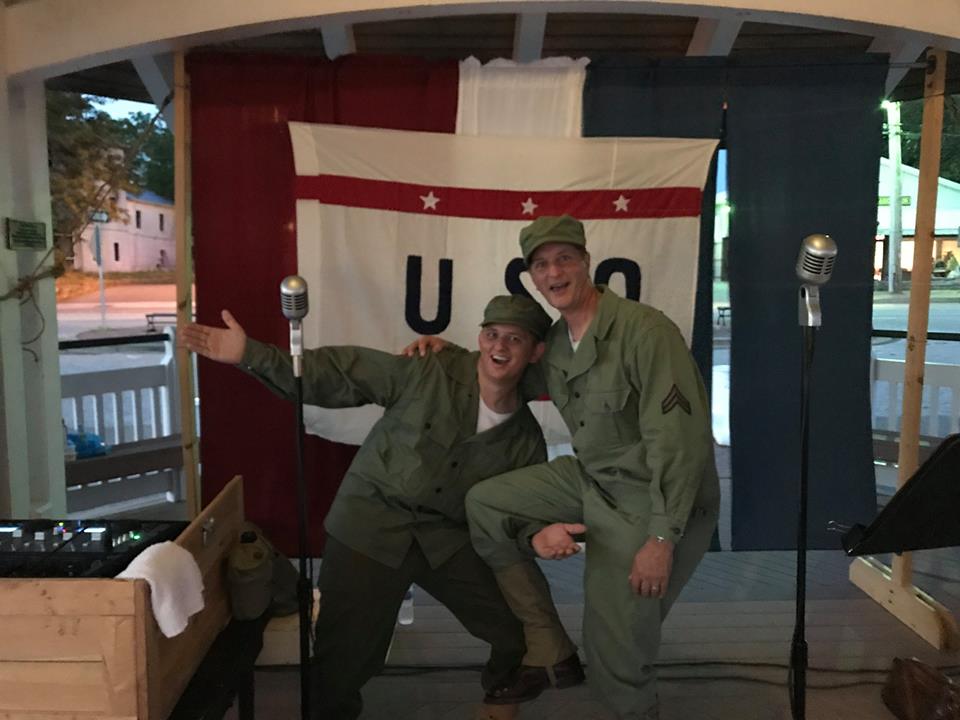 Every year the Circle of Angels Initiative, Inc. hosts WWII USO Night of Remembrance and Music to honor those who served in uniform and on the home front at the local historical site, Solomon’s Island, “the cradle of invasion.” Free and open to the public, the11th Annual WWII USO Night will be held from 6 to 9 p.m. at the gazebo on the Solomon riverwalk pavilion Friday, August 3. WWII Allied Command chose Solomon as the top secret base for training amphibious invasion forces. This year the Circle is adding Operation Solomon Cradle of Invasion, a motorcade. There will also be a commemoration of 9/11 and the 100th Anniversary of the WWI Armistice. Besides the commemorations, SPAMtime T/5 Vince “SPAM” Turner and PFC Vincent “Bubba” Turner will reenact a 1942 radio broadcast of music from the WWII era.

Last year WWII Army veteran, Mr. Methuselah Pumphrey, laid the wreath at USO Night’s 10th anniversary. Not allowed to train for combat at Solomons because of segregation, he trained in Alabama and served in Europe during the war. This year the Circle is inviting all WWII veterans to ride in the inaugural Operation Solomon Cradle of Invasion (OpSol). OpSol is a motorcade to honor all participating WWII veterans. Starting near the Naval Air Station Patuxent River (NAS), motorcycles will lead the motorcade of veterans over the bridge to Solomons. The public is encouraged to line the parade route, wave flags and cheer them on.

“It’s appropriate for OpSol to start out at NAS because it was commissioned in 1943 during the toughest times of conflict in WWII as ‘the most needed station in the Navy,’” Roseanna Vogt, director of the Circle, explained. “We wanted to invite Mr. Pumphrey back to USO Night. After eleven years there are a number of WWII veterans we want to invite back plus the reality of their dwindling numbers motivated us to host this year’s inaugural OpSol so we could honor as many of them as are willing and able to come out. If you are a WWII veteran or have a family member who is a WWII vet, we want to hear from you.”

Once the OpSol motorcade arrives at Solomons, SPAMtime will entertain with a USO-style show. A wreath laying ceremony will be at 7 p.m. After the ceremony, the public will be invited to throw rose petals into the waters of the Patuxent. The roses have special names, “Peace and Love,” “Remembrance,” and “WWII Memorial Rose.” Taps are at dusk. The United Services Organization or USO began with citizens who served coffee and donuts to soldiers passing through their towns.

“We honor because of the irony and also because of the number of people who gave their lives in the invasions in the Pacific and at Normandy. We chose the first Friday in August for our date every year because it was on the first Friday, August 7, 1942, the first invasion in the Pacific Solomon Islands after training here in our local community,” Vogt said. “Those brave people went from Solomons here to Solomons there in the Pacific and shed their blood for our liberty. I feel we must honor that sacrifice. 2018 is the 100thanniversary of the WWI Armistice. Since it’s also the 11th year for USO Night, we thought it fitting to honor everyone from the ‘Great War to 9/11 and Global Conflict.’ We also want to honor those who wait at home, the families and friends, home front heroes and heroines, who support them.”

The Circle of Angels serves in policy and advocacy to move people out of poverty into prosperity (P2P). USO Night fits into their mission because it is a community building exercise and it brings awareness to veterans’ issues.

To reserve a spot in the motorcade or for more information, please contact the Circle at 301-778-3848 or director@circleofangels.org.