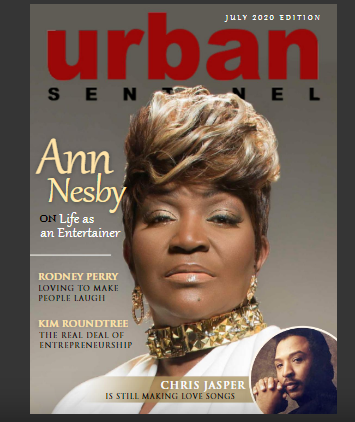 June went by with the speed of light, and now here we are in the month of July. I thank everyone for the support that was shown towards the June 2020 issue of Urban Sentinel magazine.

This month’s magazine is complete with many engaging articles that cover a number of topics. The cover story for this month is Ann Nesby, 2x Grammy award winning recording artist, known as the queen of inspirational soul, is a singer, songwriter, producer, and actress. Ann is the former lead singer of Sound of Blackness, and she is also a songwriter with credits which include hit songs by Patti Labelle and Gladys Knight, plus she costarred in the 2003 romance musical The Fighting Temptations with Cuba Gooding Jr. and Beyonce.

Other cover feature stories include longtime comedian Rodney Perry, Entrepreneur and Businesswoman Kimberly Roundtree, and Chris Jasper who is a former member of the Isley Brothers and Isley-Jasper-Isley.