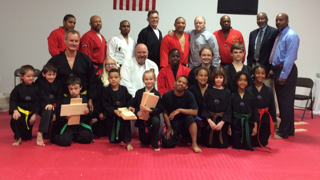 Serving the community through the Academy, Parker is also currently serving as President of the Calvert County Minority Business Alliance (CCMBA). He is an experienced instructor with 40 plus years of training and 26 years of teaching. He started his journey in Martial Arts at the age of 10 under the instruction and leadership of Grand Master, Patrick H. Nutter, also a commissioner on the Calvert County Board of County Commissioners. Nutter was on hand for the ceremony and officiated over the certification of black belt recipients.

“Martial arts are not only a way to train the mind and body,” said Parker, “but also a way to train oneself in life. I like to emphasize the importance of honesty, integrity, character and excellence in the training. I hope to motivate and inspire my students to become an inspiration to others.”

Master Parker has always had an entrepreneurial drive.  Prior to becoming a business owner, he was a manager for Burger King and Safeway.

“I learned business from the ground up,” said Parker who, among other endeavors, started his own private security company, Elite Protective Services, acquiring contracts with private and commercial entities. Master Parker has been in business for 26 years in several counties, specifically Calvert, Anne Arundel, Prince Georges and Baltimore County.

Elite Martial Arts Academy tag line is “We are Devoted to the Instruction of Martial Arts and Personal Achievement.”